Who is the greatest soccer player of all time?

Quite possibly the most beloved athlete in the history of sports. Edison Arantes do Nascimento, known only as Pelé, is a star on the level of Babe Ruth, Pablo Picasso, or Michael Jordan. He led the Brazilian National Team to a record 3 World Cup Titles in ’58, ’62, ’70. He scored an astronomical 727 career goals, with a blistering goals per game rate of .92. Including unofficial friendlies and tour games, Pele scored a Guiness World Record 1281 goals in 1363 games. His talents were considered god-like by the people who played both alongside and against him, and his impact on the game is without equal. Today he is revered as a hero to millions of soccer fans around the world, and his legacy will shine bright for eternity.

The second most prodigious goal scorer in human history. Eusébio is probably the most beloved Portuguese athlete of all time (although he was born in Mozambique, and Christiano Ronaldo is gaining ground). The man with super-cool nicknames, such as Black Panther, Black Pearl, and o Rei (“The King”), Eusébio was one of the most dynamic and exciting players to ever play the game. Gifted with supreme athleticism, he probably would have been an elite NFL running back had he played the other version of football. His deadly mix of speed, strength, and technique allowed Eusebio to rack up 749 goals in just 743 appearances, averaging over a goal per game. With a career featuring video game level statistics at every level, and 11 league titles with Benfica, Eusebio consistently enters any conversation of the greatest soccer players of all time.

The most beloved Argentian soccer player of the 20th century. Diego Maradona is one of the most famous and infamous athletes in South American history. His effort to propel his home country to the 1986 World Cup title will stand forever as one of the great tournament performances in sports. In that tournament, he authored a goal that is now widely considered to be the greatest goal in soccer history. Known as the “Hand of God” goal, Maradona’s miraculous 10 second single-handed display of quickness, vision, ball-handling, and finishing was a masterpiece of football artistry on the grandest stage. With a gaudy career resume featuring 4 World Cup appearances and multiple league titles with Barcelona and Napoli, Diego Maradona is without question one of the most impressive soccer players of all time.

The greatest Brazilian soccer player not named Pelé. With 296 goals in 400 professional appearances, and a goal rate of .74, Brazil’s Ronaldo is one of the best South American football players in history. Leading the national team to two World Cup titles in ’94 and ’02, and a runner-up performance in the ’98 Cup, he is one of the most decorated World Cup competitors ever. His 62 national team goals are the second most for any Brazilian (behind only Pelé). In addition to his strong team honors, Ronaldo is one of the most individually decorated soccer players in history. With a trophy case including: 2 Ballon d'Ors, 2 Onze d'Ors, 3 FIFA World Player of the Year Awards, and 4 World Soccer Magazine POY awards, few athletes have ever maintained their place at the very top of the sport for as long as Ronaldo.

The greatest defensive player in the history of soccer. Nicknamed “Der Kaiser” (“The Emperor”), Franz Beckenbauer is one of the most important athletic figures in German history. While he started his career as a midfielder (most elite players are goal scorers in their youth), Beckenbauer earned his stripes as a dominating defensive sweeper. With a rare ability to stop the ball as opponents tried to invade the offensive zone, and a strong talent to impact his team’s own offense, Beckenbauer is one of the most versatile players in history. His rangy, aggressive style led his teams to strangle opposing offenses and apply consistent pressure in the scoring zone. Leading his West germany squad to a win in the 1974 World Cup, Beckenbauer also went on to coach in the World Cup and he remains highly involved in the sport. For the advances he pioneered on the defensive end, and for his strong leadership during international championships, Franz Beckenbauer must be considered among the GOATs of soccer. 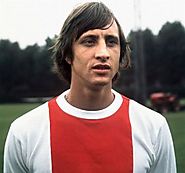 The most accomplished Dutch soccer player of all time. Johan Cruyff is the quintessential example of Rinus Michael’s soccer philoshopy, known as Total Football. This tactical approach to the game allows any player to freely move about the field and man several different positions throughout a match. It requires a highly skilled, intelligent squad of players that are comfortable performing different tasks all over the field. Johan Cruyff is the epitome of this versatile, all-powerful style. He orchestrated the entire offense with his movement and passing, and many opponents marveled at his wisdom on the pitch. He gained the nickname “Phythagoras in boots” for the highly complex strategies he employed and his teams maintained league dominance throughout his career. With his wide-ranging impact on the game, and consistent performance as the best player in the league, Johan Cruyff is surely one of the greatest of all time.

The greatest Eastern European soccer player of all time. One of the most prodigious goal scorers in the history of the sport, Ferenc Puskás’ insane goal rate of .97 goals per game is a testament to his ability to completely overtake a match. Soccer is a game that naturally discourages individual ownership of the outcome. It’s a team sport where you traditionally need cohesive and balanced contributions from each player to achieve a desired outcome. But Puskás seemed to ignore the general consensus and he would single-handedly take-over a game and put the entire team on his back. In 1995, the International Federation of Football History & Statistics named Puskás the top scorer of the 20th century. It’s just own of the many honors that clearly validate him as one of the true GOATs of soccer.

The best soccer player of the 21st century. If an alien came to earth and asked the human race to assemble our most impressive living athletes, we’d line up a cavalcade of physical specimens. We’d put forth the likes of: Lebron James, Serena Williams, Michael Phelps, Calvin Johnson . . . and the aliens would probably do a double take when they came to Messi's place in line. Standing only 5’6” and weighing less than 150 lbs, Messi doesn’t look the part of a prototypical superstar; but put him on the field with a ball at his feet and your mind will be opened to a brand of soccer wizardry that defies the imagination. Blessed with cheetah like quickness, and a magnetic command of the ball at his feet, Messi does things on a soccer field that we haven’t seen for generations. With powerful shot making ability from both the right or left boot, and a motor and competitive drive that rival any other all-time greats, Lionel Messi has placed his career on a path that leads squarely to the title of GOAT. 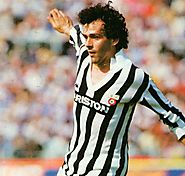 The greatest passer and the greatest Frenchman in soccer history. Michel Platini is widely considered to be the most skilled distributor of the ball in the history of the game, and is certainly on the short-list of greatest free-kick specialists in history. With masterful accuracy on his kicks, Platini greased the gears of some of the most dominating squads in the history of France. As an attacking midfielder, he was also a gifted scorer, holding the French national team record for goals for over 20 years. As one of only 3 men to win the Ballon d’Or 3 different times (joined by Cruyff and Marco van Basten), Platini is certainly one of the most talented people to ever kick a ball.

The greatest European Champion’s Cup athlete of all time. Alfredo di Stéfano was the clear-cut leader of what would become one of the greatest dynasties in the history of sports. His Real Madrid club absolutely dominated the world of European soccer in the late 1950s, winning 5 cups in a row from '56-'60, thanks in large part to the leadership and production of di Stéfano. Another remarkable goal-scorer, he held the Real Madrid club record for goals for nearly 50 years before it was surpassed by Raúl in 2005. A two-time Ballon d’Or winner, and a national hero in both Argentina and Spain, Alfredo Di Stéfano must always be remembered for his incredible talents and contributions to the sport.

The greatest German-born goal-scorer of all time. Gerhard "Gerd" Müller was an instinctive and exacting assassin on the pitch. Ranking 11th on the all-time international goal-scoring list, Müller had an uncanny ability to force his will on the game and push the ball across the scoring line. He was gifted with extreme high-twitch muscles that allowed him to accelerate very quickly in space and beat the defenseman to gain an advantage. He also displayed a laser-like command of his shot, scoring hundreds of gorgeous goals throughout his career. In pairing with Beckenbauer to lead their West Germany club to the ’74 World Cup championships, Gerd Müller cemented his place among the greatest legends of the sport.

Greatest Mythological Creature of All Time

Greatest Extinct Animal of All Time

Greatest Recovered Artifact of All Time

Greatest Engineering Feat of All Time